Johnny’s mother looked out the window and noticed him ‘playing church’ with their cat. The cat was sitting quietly and he was preaching to it. She smiled and went about her work.

A while later she heard loud meowing and hissing and ran back to the open window to see Johnny baptising the cat in a tub of water.

She called out, ‘Johnny, stop that! The cat’s afraid of water!’

Johnny looked up at her and said, ‘He should have thought about that before he joined my church.’

Welcome S, and as you’ve already found out: the water’s fine!

In an age when fewer people seem to be part of a worshipping community Sunday by Sunday, the churches are tempted to emphasise how fine the water is. The message may be only about positive things: the peace and joy that is found in Christ, the healing of our souls that is possible—and we rightly emphasise those things. But sometimes we do it in a way that distorts the message of Jesus.

Douglas John Hall has said that the message the churches present

is a positiveness that is phony and ridiculous: a bright and happy message that has all the depth of a singing commercial.

We do have a positive message, of course. The peace and hope that our faith gives sustains us through the ups and downs of life.

And we shouldn’t lose confidence. I heard of a synod meeting in which people were bemoaning the state of the church. Someone was saying, ‘What have we got to offer anyway?’

Near occasions of grace

There’s a strand of Christian belief and practice that talks a lot about ‘near occasions of sin’. For example, the Baltimore Catechism of the Roman Catholic Church says this (Question 207):

What do you mean by the near occasions of sin?

Answer: By the near occasions of sin I mean all the persons, places, and things that may easily lead us into sin.

This teaches us to avoid situations that lead us into temptation. It ranges from the obvious: I don’t go to brothels in order to give pastoral care. (I found out the whereabouts of the local brothel at a recent ministers’ fraternal meeting, of all places. Everyone else seemed to know.) But avoiding near occasions of sin may also lead to things that are less black and white than that: should I as a minister go to the local bottle shop? Some would say that’s a non-question, why worry about that, while others would tell me I just shouldn’t go there.

So a near occasion of grace may be where there are persons, places, and things that may easily lead us into further grace.

Near occasions of grace are often places and times in which we are confronted with something beyond us, perhaps way out of our control. In that place and that time we may find God’s grace waiting for us, loitering with intent, just around the corner. An ordinary day may be the time when God’s unexpected grace reveals itself to us.

Grace often surprises us, and it may not look like grace. When the fishermen Simon Peter, Andrew, James and John set out for a day’s work one morning, it probably seemed like any other. The sun might have been shining, or it may have clouded over, but my guess is that it started as an ordinary day.

Then Jesus came along.

END_OF_DOCUMENT_TOKEN_TO_BE_REPLACED

Near occasions of grace

I’ve been struggling with what to say this Sunday… So many possibilities, but little inspiration. I caught a phrase this morning in a wonderful book of Richard Rohr’s I use, called Radical Grace: Daily Meditations, in which he writes:

We want to plant ourselves in near occasions of grace, yet we spend all our life avoiding near occasions of sin. Can there be situations that we allow ourselves to enter which will force us to reevaluate everything? That is certainly what the Third World did for me. That’s what joining the Franciscans as a young man did for me, that’s what New Jerusalem did for me. You have to find those situations and contexts and ways of looking out at the world, so you will feel and think differently about reality. It won’t come just from sermons and books. We are converted through new circumstances. Grace best gets at us when our guard is down.

I’m pondering ‘near occasions of grace’ in the wake of the flood/kingdom of God as a theme for preaching in two days. Might happen. Might not.

It also reminded me of U2’s excellent song, Grace, from All that you can’t leave behind. Here’s a clip from YouTube:

It seems the floods that hit Queensland and Brisbane have hit the headlines all over the world… It’s been a bit hard for us to tell because we’ve been without power for several days. We got it last night—ah, that hot shower this morning!!

The picture below is of our stretch of the Brisbane River. Our house is arrowed; we were spared inundation, thank God. The house is normally a fair bit above the river, I’d say about 10 metres below the road. The river got within 2 metres in the end, and was closer than it is in this photo (original here). We were a tad nervous. You can see the width of the river here; I’m sure that helped to save us too. In the end, the river was probably a metre below 1974 levels.

Again, this is NOT the flood at its height! I’ve circled the part of the road that was under; we were cut off by road, but we could walk to higher ground to stay a night with friends. 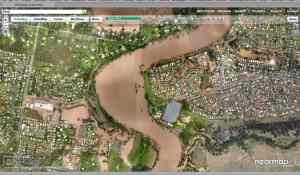 Here is A Collect of the Morning, from An Australian Prayer Book:

Lord our heavenly Father,
almighty and everlasting God,
we thank you for bringing us safely to this day.
Keep us by your mighty power,
and grant that today we fall into no sin,
neither run into any kind of danger,
but lead and govern us in all things,
that we may always do what is righteous in your sight;
through Jesus Christ our Lord. Amen.

Tagged as 2011 flood, A Collect of the Morning, An Australian Prayer Book, Brisbane floods, Queensland floods

Floods. In Queensland generally and in Brisbane itself, we are in the highly unusual position of being able to say we’ve had enough rain, thank you very much. We’ve been through a trial this week, with a devastating flood comparable to those of 1974 and 1893. Some of us have suffered flood damage, some have given help to others, some of us have been spared damage to our house and property. Not one of us is unaffected. The Courier-Mail says that 927 houses have been flooded in the Centenary, Sinnamon Park and Seventeen Mile Rocks areas. Our suffering has been small compared to the people of the Lockyer Valley, where lives have been lost.

Our own house is by the river at Riverhills, and is—normally!—quite high above the river. We weren’t so high above it the other day…! We lost power like everyone else, and we were cut off by road. We were able to walk out through a laneway, which is how we had shelter at Brenda’s place, but cars couldn’t get away. People who wanted to leave did have another option; the local rowing club ferried people across to the other side. They were absolutely wonderful!

We had a street bbq on Thursday night to use up food that was unable to be kept because of the lack of power. We’ve got to know our neighbours better—and we’ve had to rely on the kindness of friends and strangers alike to get through these last few days. We are very thankful indeed.

I want to speak a little personally today—I seem to do that from time to time. You may find something of yourself in my reflections.

All this has reminded me of a poem called Who am I?, which was written in 1943 by Dietrich Bonhoeffer, while he was imprisoned by the Nazis. Bonhoeffer was a Lutheran pastor and theologian who was hanged on Hitler’s direct orders only a few days before the end of World War 2.

END_OF_DOCUMENT_TOKEN_TO_BE_REPLACED

First Sunday after Epiphany: The Baptism of Jesus (Year A, 9 January 2011)

When I was a young minister in my first placement, I had quite a difficult conversation with a visitor to the town. She started by talking to me about baptism. She wondered if I thought that baptism is important. I replied ‘Yes, I do’. This gave her the opening she wanted to announce with great enthusiasm that she had never been baptised. She was waiting for a word from the Lord direct to her telling her that she should be baptised. Until she had a direct word from God, she wasn’t going to be baptised.

What do you think about that? Should she have waited for a special word from God to her alone? My answer is this: She has already had a direct word from the Lord. This woman was sadly mistaken. In fact, she’s had quite a number of direct words!

END_OF_DOCUMENT_TOKEN_TO_BE_REPLACED

A Word of love

It’s not a coincidence. John meant to do it.

John wants us to see the strong connection between the first beginning, which is the creation of the world, and the new beginning that has come into being in Jesus Christ—the new creation in Christ. ‘If anyone is in Christ, there is a new creation.’