Baptism is Christ’s gift.
It is the sign by which the Spirit of God
joins people to Jesus Christ
and incorporates them into his body, the Church.

In his own baptism in the Jordan by John,
Jesus identified himself with humanity
in its brokenness and sin;
that baptism was completed in his death and resurrection.
By God’s grace,
baptism plunges us into the faith of Jesus Christ,
so that whatever is his may be called ours.
By water and the Spirit we are claimed as God’s own
and set free from the power of sin and death.

Thus, claimed by God
we are given the gift of the Holy Spirit
that we may live as witnesses to Jesus Christ,
share his ministry in the world and grow to maturity,
awaiting with hope the day of our Lord Jesus. — from Uniting in Worship 2

Some of you know that I used to be part of an Open Brethren congregation as a young man. When the Brethren talk about baptism, they seem to be describing quite a different thing to baptism in churches like the Uniting Church.

Briefly, the Brethren only baptise adults. And they say that a person should only be baptised once they have been converted, once they are someone who ‘has’ the Holy Spirit inside them.

We baptise people of any age. I’ve baptised old people, children, babies—including babies that were about to die.

What can a baby who is about to die bring to the life of the church? We don’t baptise people for what they can bring to us, although a dying baby brings so very much. We baptise people to declare and demonstrate the infinite grace of the triune God.

Why did John baptise people? Luke tells us that John the Baptiser

went into all the region around the Jordan, proclaiming a baptism of repentance for the forgiveness of sins…

‘A baptism of repentance.’ What on earth was that?

Well, to repent is to change your mind, it is to turn around and move in another direction. John’s baptism signified a change of life.

the people were filled with expectation, and all were questioning in their hearts concerning John, whether he might be the Messiah…

But John was preparing the way for the Messiah, Jesus. And repentance, changing your life, was the way to prepare.

And when the Messiah came, John said,

He will baptise you with the Holy Spirit and fire.

In English, the word ‘spirit’ also means strong alcohol. In a similar way, in Greek (and Hebrew) the word for ‘spirit’ is the word for wind, or breath. So we can imagine John as suggesting we also think of ‘wind’ when we hear ‘spirit’. Then, he could also be implying this:

He will baptise you with holy wind and fire.

Wind and fire? That sounds dangerous, especially in Australia in a time of catastrophic climate change. In fact, John does paint a quite terrifying picture:

His winnowing fork is in his hand, to clear his threshing floor and to gather the wheat into his granary; but the chaff he will burn with unquenchable fire.

Back then, they obtained their grain by beating the harvested stalks on a threshing floor to separate the grains. That gave them a mixture of grain and all the rest, the useless chaff. They would then toss the mixture into the air with a winnowing fork. The heavy grain would fall to the ground, while the wind blew the chaff away.

So, while the baptism of Jesus uses water, it signifies the Holy Spirit/wind and fire. The baptism Jesus brings is not the same as John’s baptism of repentance, but it fulfils it. John’s baptism looks forward to Jesus’ baptism, and then also to Christian baptism.

The wind of the Spirit blows through our lives to cleanse and renew us. In John 3, Jesus says of this wind:

The wind blows where it chooses, and you hear the sound of it, but you do not know where it comes from or where it goes. So it is with everyone who is born of the Spirit.

We can’t control the way the wind blows. But we can learn to be more aware of the Spirit and her ways.

You’d think the Book of Acts might help us here, but no it doesn’t. Today’s reading shows Samaritans being baptised but not receiving the Spirit. This was so concerning that Peter and John came to check it out. Baptism and the Holy Spirit are associated with baptism in Acts, but in different ways—sometimes they come together, sometimes one or the other comes first. People who want to have everything buttoned down neatly walk away from the Book of Acts scratching their heads. Or they build a theological house of cards that cannot withstand the Spirit-wind and fire.

Whatever, in today’s reading from Acts ‘Peter and John laid their hands on them, and they received the Holy Spirit’. We’re not told how they knew; in some parts of Acts people speak in tongues, and so there are people today say that’s the sign of receiving the Spirit (even though the Apostle Paul downplays speaking in tongues in 1 Corinthians 14).

What does it mean to ‘receive the Spirit’? It does not mean to ‘have’ the Spirit as a possession. That’s the worst mistake we can make here. I have the Spirit—but you don’t. No one can say that.

Baptism declares all this. I started by talking about the Brethren idea of baptism. They are very good at emphasising that baptism and repentance go together, but in their view baptism does nothing. It’s simply a declaration that you have faith, and therefore have the Spirit.

Most Christian churches, ourselves included, say that baptism does do something—it makes us part of the church, the visible community of Christ in the world. It initiates us into the life of a community open to the Holy Spirit, a life of attending to God’s wind and fire that Jesus embodied and that he conveys to us today in his risen life.

I’ve been helped in all this by looking at the way baptisms were conducted in the earliest centuries of the church’s life. Let’s look at some pictures of ancient baptisteries: 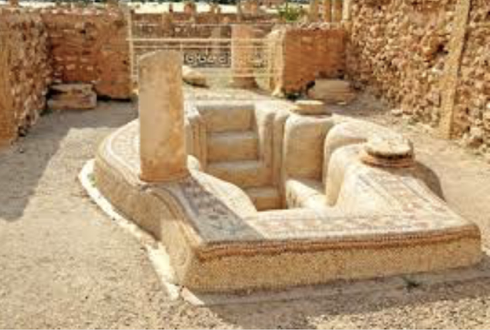 You can see that these baptisteries are set into the ground, and that there are steps going into the pool. The person to be baptised would have removed all the clothing and jewellery before stepping down into the pool. This is symbolic of getting rid of every attachment that keeps us from God, any status symbol, every possession, anything. We simply come to God as we are. Like the old song, ‘Just as I am, without one plea…’

Once in the pool, the person stood while water was poured over them in the name of the Father, the Son and the Holy Spirit. They then stepped out of the pool and were clothed with a new white robe. This mirrors what scripture says in Galatians 3.27–28:

It didn’t matter whether it was a civic leader or a slave. Coming to baptism naked, washed in the name of the triune God, being clothed with the same robe of righteousness, we are one in Jesus Christ.

This is the work of the Spirit-wind and fire.

If Paul were writing today, I’m sure he’d also include something like

We don’t baptise people this way, and we lose the symbolism. We make it a cute event for a baby, and pass by the seriousness of the baptismal covenant. But we still use the strong name of the Trinity. It is still initiation into the church as a community of people seeking to be responsive to the Spirit. It still unites us to Christ in a public way.

John’s baptism was about repenting, turning around, walking a new way. We baptise people into that ‘repenting’ life, a life directed by the breath and the fire and the flow of the Spirit of Christ. We baptise people who come with faith; we baptise babies who are immersed into the faith of the church, and grow up in that faith.

The Spirit’s flow carries us towards justice. Justice for the world, and for all people. Justice for the earth, in a time of catastrophic climate change. The flow of the Spirit must start within us, as we grow into the likeness of Jesus. As we grow as disciples.

In this we follow the example of the Lord Jesus. In baptism we are clothed in his life, and his righteousness. So we celebrate the baptism of Jesus, and continue to give thanks for the new life that baptism initiates us into. Thanks be to God.

Tagged as all one in Christ, Baptism of Jesus, baptismal covenant, baptisteries, John the Baptist, receiving the Spirit, repentance, wind and fire