Cheap grace is the mortal enemy of our church. Our struggle today is for costly grace.

Cheap grace means grace as bargain-basement goods, cut-rate forgiveness, cut-rate comfort, cut-rate sacrament; grace as the church’s inexhaustible pantry, from which it is doled out by careless hands without hesitation or limit. It is grace without a price, without costs. It is said that the essence of grace is that the bill for it is paid in advance for all time. Everything can be had for free, courtesy of that paid bill. The price paid is infinitely great and, therefore, the possibilities of taking advantage of and wasting grace are also infinitely great. What would grace be, if it were not cheap grace?

Cheap grace means grace as doctrine, as principle, as system. It means forgiveness of sins as a general truth; it means God’s love as merely a Christian idea of God. — Dietrich Bonhoeffer, Discipleship

There are some easy-to-miss words at the beginning of today’s Gospel Reading. Here they are again:

Now large crowds were travelling with him…

Large crowds were travelling with Jesus. Great numbers of people. You know what can happen when people get together in a crowd? They can become a mob very easily. A mob mentality can take over very quickly.

So what does Jesus do? He gets them to count the cost. He sorts them out. Those who really can’t last the distance need to feel free to leave. So he speaks in the exaggerated way that teachers of his day had:

Now there are a couple of things to say here. When I suggest that Jesus is thinning out the crowd, I’m not talking about their eternal salvation. It’s a strategic move only.

Secondly, we must remember Jesus is using exaggeration. He doesn’t really mean that a true disciple hates her family.

I mean, we use exaggeration all the time, don’t we? (See what I did there?)

Not that song again? We’ve sung it thousands of times!

I’m starving. I could eat a horse!

He’s got truckloads of money.

I was so embarrassed, I literally died!

Do you believe anything I’ve just said? Did I literally die? Could I eat a horse?

This is how we need to think when we read today’s Gospel Reading. We don’t hate our family, but sometimes to follow Jesus we must prioritise his Way over family.

So when Jesus goes on to speak about the calculations needed to build a tower, or the planning necessary to wage a war, he’s not saying we should build towers or wage wars. He’s saying count the cost of being part of the Jesus movement.

Because there was a cost in following Jesus. He called his followers to carry the cross with him. We’ll come back to that later.

There is a cost today. 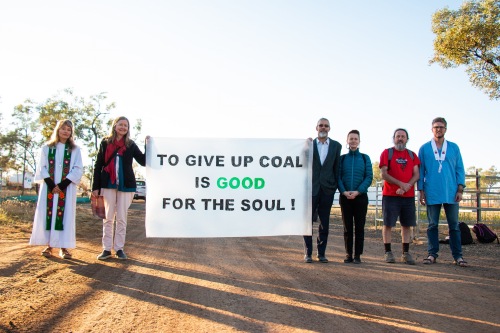 This photo was taken just this week. The Australian Religious Response to Climate Change had a quiet action at the Adani site this week. The robed minister is Rev Alex Sangster, a Uniting Church minister from Victoria. The people in this photo are certainly courting ridicule and opposition. Six people were arrested on Thursday; they were later released without charge. Alex is one; perhaps the other five are those in the photo.

Mind you, it’s not new to be arrested as a Christian. Just about everyone in the New Testament gets arrested. Including Jesus!

And Rev Robert Stringer was here in July with Revs Dr Anita Monro and Russell Morris when they took the service; Rob was arrested in the Kimberley over in Western Australia along with four other ministers in 1980. If you want more information, ask Rev Paul Moore who was intimately involved.

Those who put the Way of Jesus first are likely to be misunderstood. They need to count the cost.

I want to speak about a man who wrote a lot about being a disciple of Jesus, and about carrying the cross. Dietrich Bonhoeffer was a German Lutheran pastor and theologian during the Nazi era. He stood up against the Nazis, and was hanged on Hitler’s personal orders shortly before the end of World War Two.

He carried the cross, not knowing where it would lead him, without any assurance that God would rescue him. Bonhoeffer was in the USA before the war; he could have stayed there, but he determined to return and resist in his homeland.

Bonhoeffer wrote about counting the cost, but in a particular way. He coined the terms ‘costly grace’. And ‘cheap grace’.

Grace is free, but not cheap.

Grace is free, but it costs everything.

When Bonhoeffer speaks about cheap grace, what does he mean?

Among other things, he means this (from Discipleship):

Cheap grace means grace as doctrine, as principle, as system. It means forgiveness of sins as a general truth; it means God’s love as merely a Christian idea of God.

One of the mistakes we Christians make is that we think understanding a doctrine is the same as really believing it.

For example: I understand the doctrine that grace is freely given. I know what it means—in my head. I can explain it to someone else.

Do you believe that there is only one God? Good! The demons also believe—and tremble with fear.

We could paraphrase James:

Do you understand what grace is? Good! The demons also understand—and tremble with fear.

Grace makes us followers of Jesus, disciples of Jesus, or it isn’t grace at all.

I’ve heard of another kind of cheap grace. Years ago, someone told me about a friend of hers who had once accepted Jesus as her Saviour but was now living in a very hedonistic way. ‘But,’ she said, ‘once she’s accepted Christ she’s bound to get to heaven, right?’

There are all sorts of problems with that way of thinking about the Christian life, but I only want to point to one: it makes grace into a possession that we own. A ‘thing’ that is ours, even if we’ve it chucked away somewhere in an old cupboard. A ‘get out of jail free’ card.

Let’s hear it once more: grace makes us followers of Jesus, disciples of Jesus, or it isn’t grace at all.

Cheap grace is grace as an idea, or as a thing that we have just in case this God stuff really is true.

So what is costly grace?

Costly grace is freely given, yet it opens our hearts and minds to God and to others so that we commit our way to the God we know in Jesus Christ.

Let’s go back to the Sea of Galilee, on that day early in Jesus’ ministry, when he called the fishers to his side. He walked by the sea and saw Simon and Andrew, James and John, and he called them to follow him: ‘from now on, you will be catching people’.

This was grace in action. Remember Bonhoeffer’s words:

Jesus called the crowd to count the cost. If they were ready, they could follow. Jesus knew which way the wind was blowing. He knew that he could quite likely end up being killed, and that those with him could be killed too.

Of course, Jesus was killed. He was killed for refusing to do any other than live a fully human life. The grace we receive is also costly in that it cost Jesus everything.

Jesus calls those who will follow him to take up the cross. That’s a reminder of what a person condemned to crucifixion had to do: to carry the cross to the place where he would be crucified.

In the end, did the disciples take up the cross? No, they did not. Judas betrayed him; Peter denied him; the rest ran. The women were braver: they looked on from a distance.

The only person besides Jesus who carried the cross was a conscript:

As they led him [Jesus] away, they seized a man, Simon of Cyrene, who was coming from the country, and they laid the cross on him, and made him carry it behind Jesus. (Luke 23.26)

Imagine that. Imagine that you are Simon of Cyrene, in Jerusalem for the Passover. Cyrene was a city in what we’d call the east of Libya. Simon is manhandled by Roman soldiers, brought into the death procession, carrying the cross. Would he end up being crucified too? I’d be surprised if he didn’t wonder. Would they crucify him with Jesus, or instead of him? What would happen to him anyway, after they got to Golgotha? Carrying the cross, walking behind Jesus, Simon of Cyrene didn’t know what might happen.

The disciples didn’t do that. They didn’t count the cost. But on the third day, their salvation came. Jesus was raised from the grave, and he came with words of peace and forgiveness. They had a second chance, they had a new start, they could be born again. The Holy Spirit—the Spirit of Jesus—guided them from within.

It’s all grace, and grace is freely given. But grace is costly. Following Jesus means giving your life to him and his way.

In an age of rampant injustice around the world, in an age of frankly horrifying climate change, I think we’re going to feel the pressure more and more. Crowds will behave as crowds do, and may sometimes become a mob. And Jesus will still say ‘Count the cost’; Jesus will still pour out that costly grace, which is the only true grace.

One response to “Costly grace”