Life from the jaws of death

Here hangs a man discarded,
a scarecrow hoisted high,
a nonsense pointing nowhere
to all who hurry by.
Can such a clown of sorrows
still bring a useful word
where faith and love seem phantoms
and every hope absurd? ― Brian Wrenn

We read these words in Isaiah 53, about a figure we call ‘the Suffering Servant’:

… he endured the suffering
that would have been ours,
the pain that we should have borne.
All the while we thought that his suffering
was punishment sent by God.

But because of our sins he was wounded,
beaten because of the evil we did.
We are healed by the punishment he suffered,
made whole by the blows he received.

For two thousand years, Christians have taken these words from the prophet Isaiah [chapter 53] as pointing toward Jesus and his suffering on the first Good Friday.

You may have heard that Jesus died because God needed someone to die in order that our sins may be forgiven. Yet Isaiah says,

All the while we thought that his suffering
was punishment sent by God.

So, was it really sent from God? Isaiah says,

But because of our sins he was wounded,
beaten because of the evil we did.

It was humans and human sin that drove Jesus to the cross: it was an unholy alliance of church and state that drove him there. His cowardly disciples didn’t help one bit.

Only a few women stayed. And, according to John, the disciple he loved.

What was the outcome?

We are healed by the punishment he suffered,
made whole by the blows he received.

It wasn’t God who put him there, it was people. It was bad people, and good people who did nothing.

God suffered on the cross in and with Jesus. God identified Godself with the godforsaken. Our God is a crucified God.

You may have realised from the way I say some words that I was born in England. My wife and I were over there a few years ago, and we visited an aunt and uncle. I didn’t know them well; it was the first time I’d seen them in 33 years and only the second in 48 years.

My uncle had something on his mind, and it took him a while to get it out. But he had to get it out before we went. He looked at me, and said in his broad Yorkshire accent, ‘Thi’s no God, lad’. There’s no God.

My uncle went on to speak of the depth of suffering he had seen and experienced growing up in the slums of Sheffield as a great industrial centre in the 1930s and 1940s. He couldn’t believe in God when such things happened.

As far as he was concerned, I was wasting my life.

It wasn’t the time for a long discussion. I had one shot at saying something helpful, and that was all. So I said, ‘Perhaps God cried with you about what was happening in Sheffield. Perhaps God was on the side of those on the bottom of the heap’.

It was a new thought for my uncle. I don’t know what he did with it; he died a few years later.

But this is the God we see on the cross. The God who suffers with us, who took the side of the condemned, crucified One. The God who snatches life from the jaws of death, who raised Jesus from the dead. Amen.

Only after disaster can we be resurrected. It’s only after you’ve lost everything that you’re free to do anything. Nothing is static, everything is evolving, everything is falling apart. — Chuck Palahniuk, Fight Club

Corruption has appeared throughout the land and sea as a result of people’s actions, so he will make them taste (the consequences of) some of their actions, so that perhaps they will return (to righteousness). — Quran, 30.41; and

The earth lies polluted
under its inhabitants;
for they have transgressed laws,
violated the statutes,
broken the everlasting covenant.
Therefore a curse devours the earth,
and its inhabitants suffer for their guilt;
therefore the inhabitants of the earth dwindled,
and few people are left. — Isaiah 24.5–6

Creation groans; and we are part of creation. So let me ask: did this last week frighten you? Like we’re on the edge of a precipice? About to fall into an abyss if we don’t burn to a crisp first?

END_OF_DOCUMENT_TOKEN_TO_BE_REPLACED 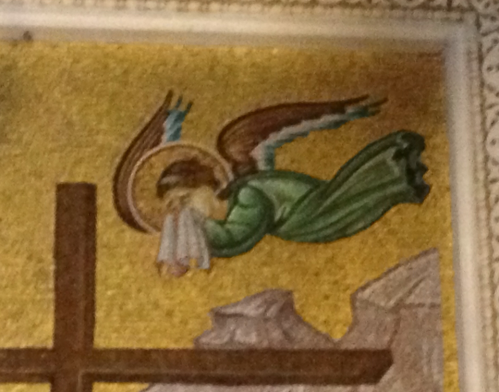 A weeping angel, but not from Dr Who: part of a mosaic in the Church of the Holy Sepulchre, Jerusalem, showing that even the angels weep at the death of Jesus.

Thirty-odd years ago, Karen and I were living over in Granville St. An elderly Greek couple lived across the road, and we were aware that the husband was very ill.

In the early hours of the morning, while it was still dark, a great wailing began in their house. It woke us up. We looked at each other; we knew his end had come. When it was light, we went across the road to offer our condolences and were welcomed inside. The house was packed full of people. We didn’t know any of them, and none of the conversation was in English. Everyone but us seemed to know what to do. We had a drink and nibbled on something, sat there for what seemed a long time (but really wasn’t) feeling useless and uncomfortable, and then said our goodbyes.

We tend to be uncomfortable with grief, and unschooled in lament. Today’s Old Testament passages are grief-filled laments. You may feel uncomfortable. I invite you to stay the course. Don’t bail, as we did.

Tagged as 'How can we sing the Lord's song in a foreign land?', Babylonian Exile, Church of the Holy Sepulchre, Natalie Hart, Robert Adler

When Karen and I lived in West End in the 1980s, we got to know a Greek neighbour. A devout member of the Greek Orthodox Church, he had come to Australia many years before to grow tobacco in Central Queensland. He wasn’t prepared for the climate out here though; after some years of working to make his farm succeed, a series of droughts broke him. He walked off the farm with his family and came to West End. By the time we met him, he was no longer an Orthodox Christian. No, he was an atheist. For him, there was no God.

Suffering can pan out in different ways. In particular, it can deepen a person’s faith, or destroy it.

Another story. Karen and I were visiting relatives in England a few years ago. My uncle had seen a lot of injustice in the slums of Sheffield when he was growing up. He said to me out of the blue, ‘Thi’s no God, lad.’ He couldn’t reconcile any belief in God because of the way ordinary people were made to suffer.

The Book of Job contains the model scriptural story of suffering. But it doesn’t answer the one question everyone asks: Why? Why do people suffer? Why me? Or, the ‘what’ question: What did I do to deserve this?

In this book, Job loses almost everything. In the terms of his day back in ancient times, he was a squillionaire. We read this about his wealth:

There were born to him seven sons and three daughters. He had seven thousand sheep, three thousand camels, five hundred yoke of oxen, five hundred donkeys, and very many servants; so that this man was the greatest of all the people of the east. (1.2–3)

Job loses the lot. His children die in a freak storm, his servants are killed, his animals are carried off by marauders.

What does Job do? He

arose, tore his robe, shaved his head, and fell on the ground and worshipped. He said, ‘Naked I came from my mother’s womb, and naked shall I return there; the Lord gave, and the Lord has taken away; blessed be the name of the Lord.’ (2.21)

Soon afterwards, Job himself is inflicted with ‘loathsome sores…from the sole of his foot to the crown of his head’.

Because it’s an ancient tale, they have ancient names: Eliphaz, Bildad, and Zophar. Job was so disfigured, his friends didn’t recognise him at first. So they wept and wailed and tore their clothes and threw dust on their heads and they sat with Job in silence for seven days and nights; ‘and no one spoke a word to him, for they saw that his suffering was very great’.

Wow, that was a good thing to do. It shows their hearts were in the right place. But Eliphaz, Bildad and Zophar have a bad reputation, you know? If folk talk about someone being a ‘Job’s Comforter’, it’s not a compliment. It means they made things worse.

What did Eliphaz, Bildad and Zophar do that was so bad? They started talking.

END_OF_DOCUMENT_TOKEN_TO_BE_REPLACED

When I was a chaplain at The Wesley Hospital, we noticed something quite concerning. We chaplains saw the way a number of young couples responded when they were confronted with a stillborn child.

These young couples were absolutely floored, of course. They suffered terrible grief, as you would expect. It was something they would never forget. That is the natural reaction to an unnatural situation.

That’s not what concerned us. Our anxiety was because it was obvious that these largely middle class couples had never before come across a problem that couldn’t be fixed.

Even more than that, to them any setback at all was a problem to be fixed. If you or your dad couldn’t fix it, you paid a professional or a tradie to do it for you.

They asked the question common to nearly all people: Why me, why us? But they also asked, Why couldn’t our technology solve the problem?

For some couples, this was the very first time they had been confronted by something huge that just couldn’t be fixed. Their usual way of coping with things just didn’t help.

What they found hard to grasp is that in losing a baby they were not being confronted by a problem. They were being unwillingly plunged into an encounter with loss, with grief, with suffering too deep for words. They couldn’t fix it, solve it, or manage it.

What could they do?